At Amber International Holdings we believe in curating enchanting experiences in the world’s most unique destinations. Just like the golden stone of the sea, we hand-pick places that hold a strong connection to the earth. 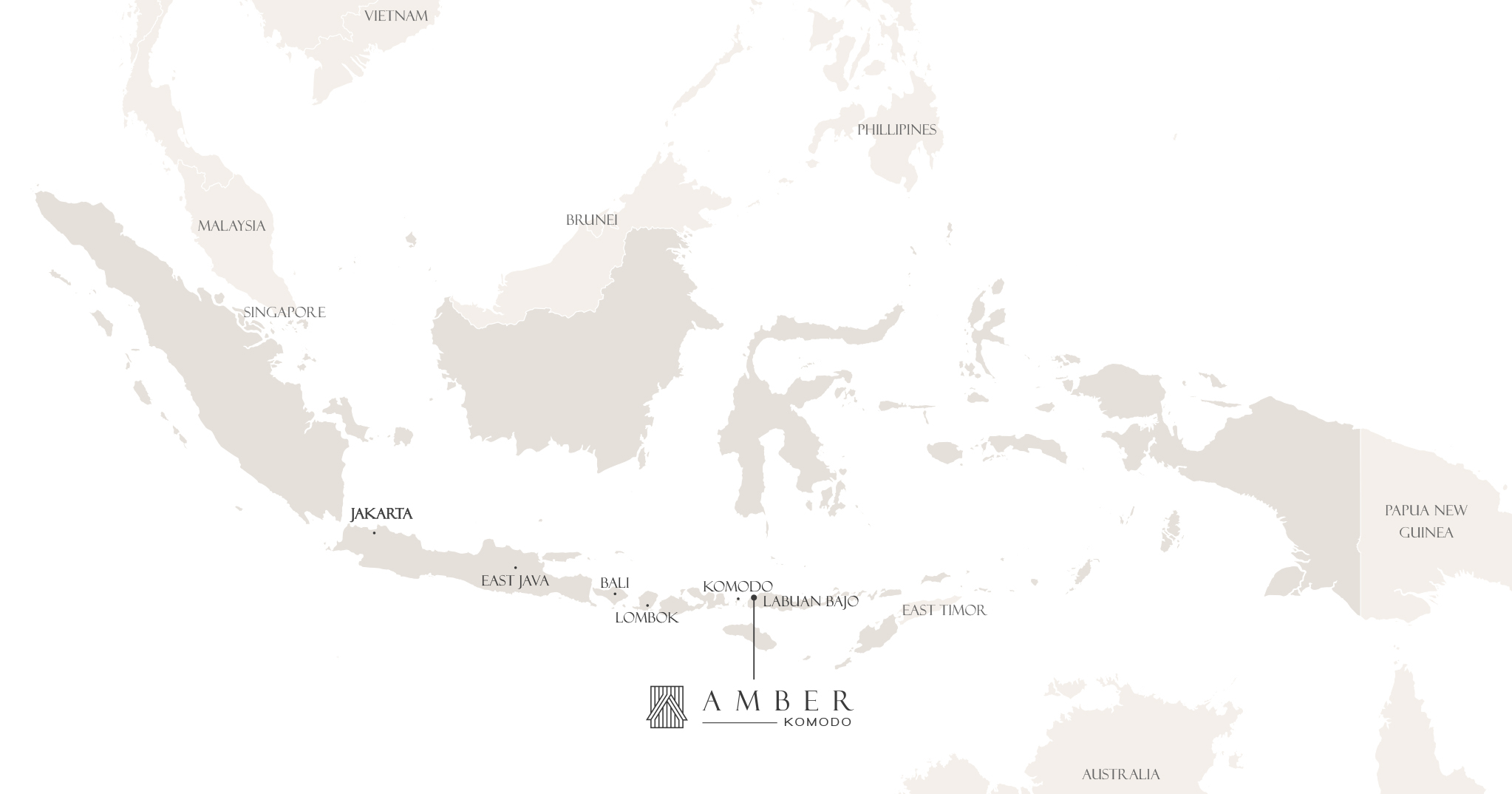 The heart of Indonesia

Indonesia is one of Southeast Asia’s most exotic destinations, caught between the Indian and the Pacific Oceans. There are more than 17,000 islands that make up the cultural paradise of Indonesia, and Komodo is one of the brightest stars burning on the Indonesian map. Flores and the Komodo National Park sits in the Lesser Sunda Islands, just north of Australia and a straight line across the island chain from Bali. 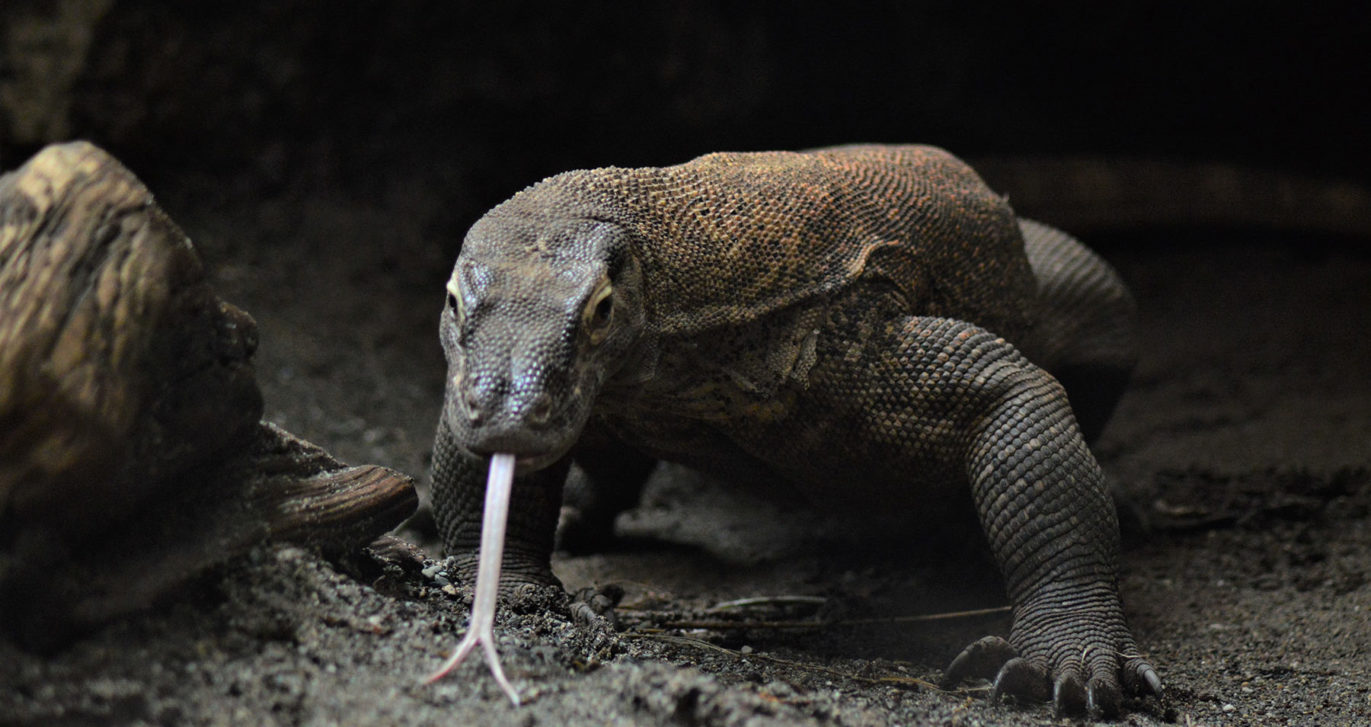 The Komodo National Park is a major pull for intrepid adventurers and Flores serves as the stunning gateway to the land that time forgot. Spanning just over 600 square km, this veritable gem of the achingly exotic Lesser Sunda Islands is home to one of the most exciting beasts in the world – the Komodo Dragon. Measuring 3m long, few people in the world have had the wide-eyed pleasure of seeing real life dragon lizards in their natural habitat. Beyond the scales and flicker of a tongue, Komodo unravels with wild swimming spots, deep cut hiking trails, thundering falls, and undulating views from the nearby islands of Padar and Rinca. 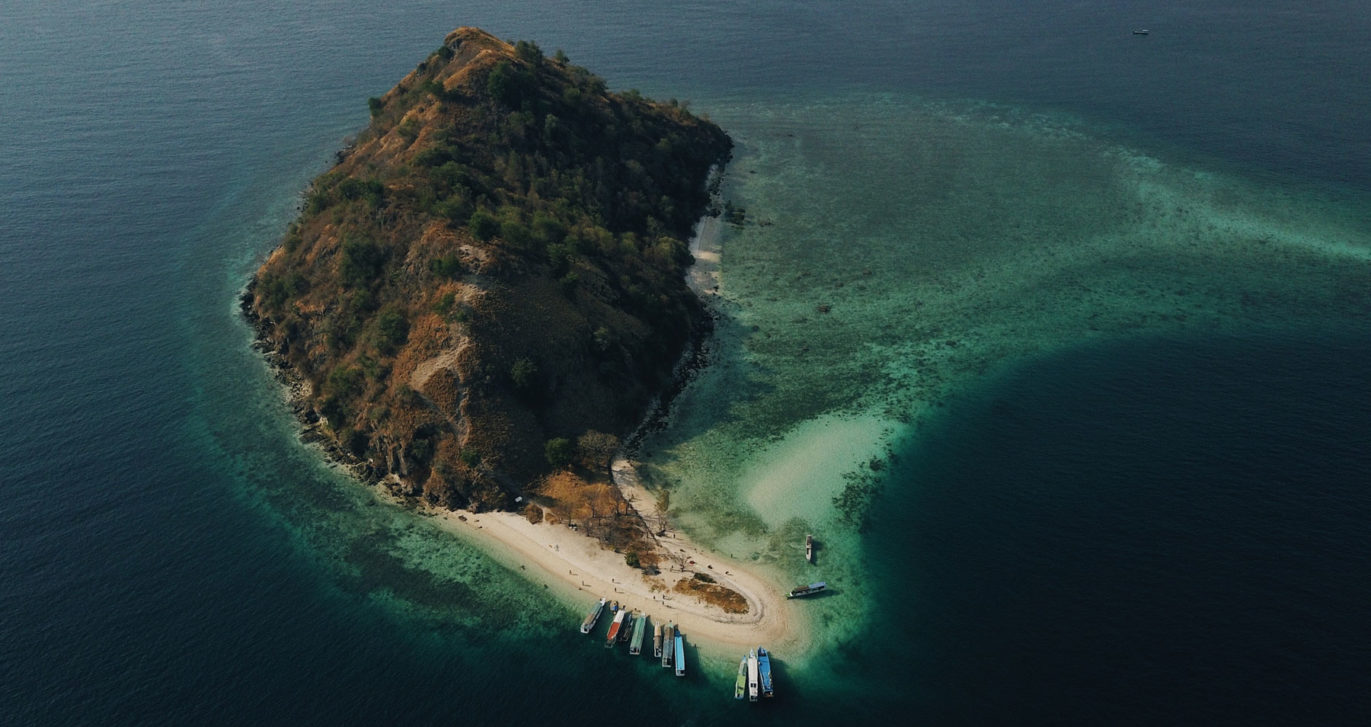 The island hosts about 2,500 Komodos that can be found roaming freely in the wild.

Enjoy the breathtaking vista both terrestrial and underwater in Komodo Island. Venture into a trekking exploration crossing its distinct dry savannah with rising Palmyra palm (lontar) trees to greet these prehistoric creatures in their natural habitat. 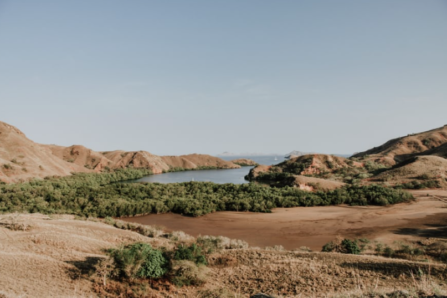 Being less known and less visited yet even more Jurassic Park than Komodo, it is a good place to see the Komodo dragon in its natural environment with fewer people to disturb them.

Aside of the dragons, Rinca Island is also abounding with local wildlife including macaques, buffaloes, deer, birds and pigs. The island also offer stunning beaches and is a great place to snorkel and diving given its teeming underwater life. 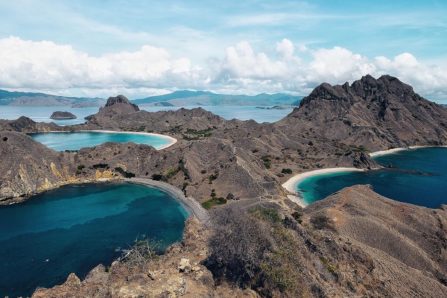 Padar often dubbed as the best place to hike in the area is currently on trend with visitors to the region due to its unique view of tri-coloured beaches from the top of the hill.

The main point of attraction is hiking to the viewpoint from which you could see the breathtaking view of the whole island. From the top, the rugged brown peaks of the dry savannah set as a contrasting background for the natural blends of the tri-coloured beaches of gray, white, and pink before flowing seamlessly into the turquoise ocean. 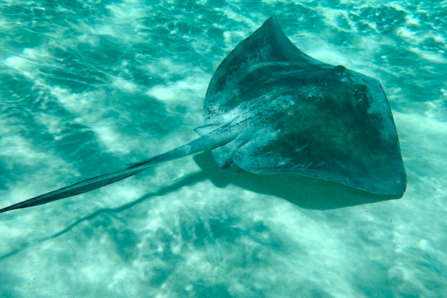 Huge playful creatures that can grow up to 4 meters wide, Manta Rays are relatively harmless and often welcome a close proximity with human. They swim elegantly around Manta Point and feed on small jellyfishes.

Aside of the mantas, the marine biodiversity at Manta Point is also relatively healthy with reefs laying from only 2 meters to 9 meters depth. Turtles, sharks, eagle rays, giant trevallies, huge clams, various kind of sponges, and cuttlefish are several things that you may see during your snorkel or dive here. 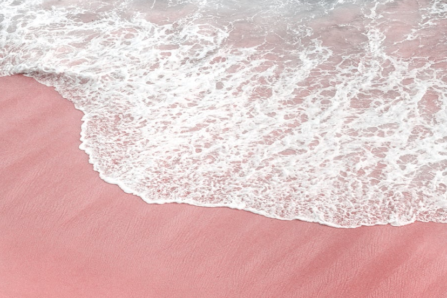 The Pink Beach of Komodo Island, as it is aptly named, possesses pink shore and is one of the seven pink beaches that exists in the world. The beach is situated in an uninhabited island, which gives in to its unspoiled location.  The atmosphere in this beach is so serene and is one of a must-stop beach after trekking in Komodo Island. Indulge in the art of doing nothing in this beach as you bask the panoramic views of turquoise seas, green rolling hills, blue skies and fascinatingly pink sands. 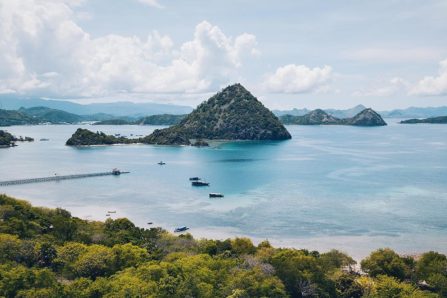 Labuan Bajo is a fishing town located at the western end of the large island of Flores in the Nusa Tenggara region of east Indonesia. It is the capital of the West Manggarai Regency, one of the eight regencies which are the major administrative divisions of Flores. 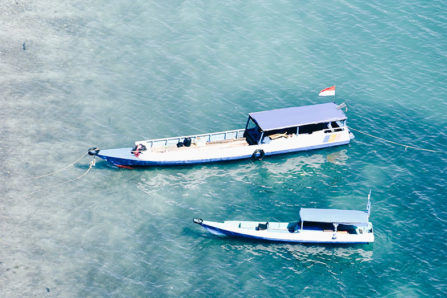 Seraya Island is one of the most famous islands in Flores and one of the big ones that everyone recommends on a visit to this part of Indonesia. There is a reef offshore which means that you can see a wide variety of marine life if you want to go snorkeling or diving and it is not uncommon to see plenty of sharks and turtles here. The island itself is also well worth exploring and you will find a dainty fishing village at one end where you can stop off for some local food and drinks. 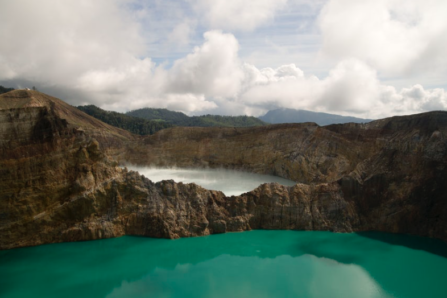 Flores is one of Indonesia’s Lesser Sunda Islands. The west coast port town of Labuan Bajo is a gateway to Komodo National Park, known for its carnivorous Komodo dragons and waters teeming with sea life, including manta rays and turtles. Mount Kelimutu, with its tri-colored crater lakes, is probably the most amazing natural phenomenon in Flores. Beyond that, the ‘steaming mountain’ is also the island’s most famous tempat angker, or mystical, haunted place. 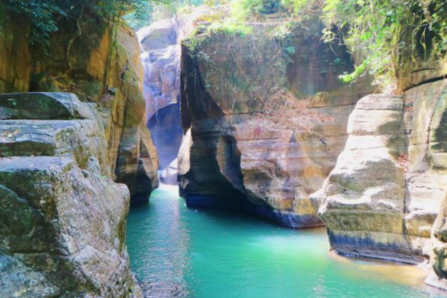 Cunca Wulang Canyon, located 30km east of Labuan Bajo and nestled in a tropical rainforest setting, is one of Flores’ most striking spots for outdoor activities. Impressive waterfalls cascade into beautiful, fresh-water pools and lead into a series of smaller waterfalls and rivers a few kilometers downstream. In recent years, Cunca Wulang gained popularity among the canyoning community as an excellent destination for this popular outdoor sport. [Image: http://nusaflorestour.co] 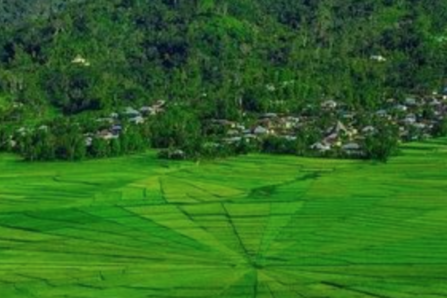 In Manggarai you will certainly notice the impressive lingko fields. The most amazing view over a number of these fields is offered at Cara Village situated on a small hill 17km west of Ruteng in Cancar. With their round, spider-web structure, these pieces of land are unique eye-catchers in Manggarai. [Image: tripadvisor] 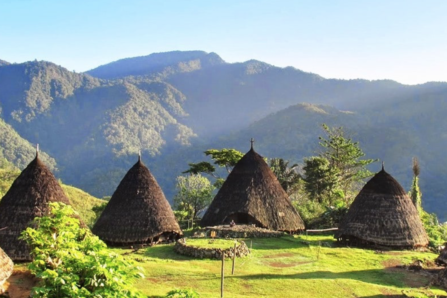 Wae Rebo is an old Manggaraian village, situated in pleasant, isolated mountain scenery. The village offers visitors a unique opportunity to see authentic Manggarai housing and to experience the everyday life of the local community. The village can only be reached by way of a three-hour hike (depending on your physical condition) from the lowlands. The hike is definitely worth the effort: the dense rain forest along the narrow path to Wae Rebo is one of a stunning biological diversity. [Image: Indonesia.travel]

• New innovative infrastructures such as the Labuan Bajo Airport which will increase tourism. The airport offers direct flights from Bali, Jakarta, and there are current plans for direct flights from Singapore and Kuala Lumpur
• There are also plans for a major rehaul of the main port enabling it to welcome cruise ships and up to 70 yachts
• Ocean front property prices have increased 14 times over the last 3 years
• Labuan Bajo was named as one of the top ten priority destinations by the Indonesian government
• Indonesia’s government are focused of making tourism the biggest export by the end of 2019, earning over $25 billion a year.
• Development plans by the government is expected to attract 500,000 tourists by the end of 2019, up from 54,000 in 2013